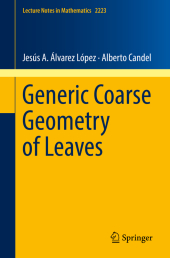 This book provides a detailed introduction to the coarse quasi-isometry of leaves of a foliated space and describes the cases where the generic leaves have the same quasi-isometric invariants.

Every leaf of a compact foliated space has an induced coarse quasi-isometry type, represented by the coarse metric defined by the length of plaque chains given by any finite foliated atlas. When there are dense leaves either all dense leaves without holonomy are uniformly coarsely quasi-isometric to each other, or else every leaf is coarsely quasi-isometric to just meagerly many other leaves. Moreover, if all leaves are dense, the first alternative is characterized by a condition on the leaves called coarse quasi-symmetry. Similar results are proved for more specific coarse invariants, like growth type, asymptotic dimension, and amenability. The Higson corona of the leaves is also studied. All the results are richly illustrated with examples.

The book is primarily aimed at researchers on foliated spaces. More generally, specialists in geometric analysis, topological dynamics, or metric geometry may also benefit from it.- Introduction. - Part I Coarse Geometry of Metric Spaces . - Coarse Quasi-Isometries. - Some Classes of Metric Spaces. - Growth of Metric Spaces. - Amenability of Metric Spaces. - Coarse Ends. - Higson Corona and Asymptotic Dimension. - Part II Coarse Geometry of Orbits and Leaves. - Pseudogroups. - Generic Coarse Geometry of Orbits. - Generic Coarse Geometry of Leaves. - Examples and Open Problems. -Jesús A. µlvarez López, was born in 1962, and studied Mathematics at the University of Santiago de Compostela (Spain), obtaining the PhD in 1987. He visited the Department of Mathematics of the University of Illinois at Urbana-Champaign during 1988-1990, with a Fulbright grant. Nowadays, he is a professor at the University of Santiago de Compostela. His research is about several topics, like cohomology of foliations, description of equicontinuous foliated spaces, quasi-isometric types of leaves, leafwise heat flow, a trace formula for foliated flows, and Witten´s complex on stratified spaces.
Alberto Candel did his undergraduate work in Mathematics at the University of Santiago de Compostela, worked briefly at the Universidad de Oviedo (Spain), and then moved on to the USA do his graduate work at Washington University in St. Louis, obtaining his PhD in Mathematics in 1992 under the direction of L. Conlon. After postdoctoral work at several places (IAS, U of Chicago, and Caltech), he settled at California State University, Northridge in 2000. His research is in geometric analysis and dynamical systems, with particular emphasis foliations.